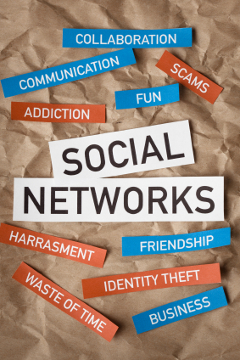 Development of social media and social networking has put more games, gossip and friends at the click of an employee’s mouse button, further increasing company fears of employees wasting time, procrastinating during paid hours. Either turning a blind-eye to the skiving, and letting other employees pick up the slack, or overly restricting the use of social media and social networking can lead to resentment from employees and lowered morale. Judging just what is the appropriate actions to take can sometimes be difficult.

Social networking tools provide free and quick communication avenues for exchanging messages with employees worldwide, providing a backdrop for simpler, more flexible collaboration and co-operation. Email, tweeting, instant messaging and blogging or podcasts and many other options are now available for ensuring you can keep your employees and customers up to date and in the loop wherever they are. Similarly social networking can be used to keep your company up to date with industry information, conferences and the latest innovations through linking with other professionals in your field.

With 80% of UK houses receiving internet and 2/3 of all adults in the UK using Facebook – just one of the many social networking platforms (OFCOM) social media and social networking is increasingly being used as businesses’ ‘marketing face’, to directly communicate with a large portion of potential employees and customers. This method largely cuts out the middle men (advertising and recruitment agencies) reducing time and money spent on marketing strategies.

Encouraging social networking connections to your company enables current, past, and future employees and customers to share experiences and feel a more personal (and therefore stronger) link with the company brand, this setup also serves as a strong communication line from the company to share useful branding messages with the public such as notification of company awards, special recognition received or any other positive messages.

Have your say on what you think social media and social networking means to business… Do you think it is something that needs protecting against, something to embrace, or a bit of both?

8 ways your Company LOSES MONEY
due to HR Policy:

Get it Now FREE!

The Consultant behind Holges Consulting: