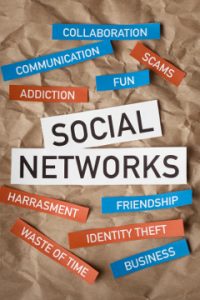 NEGATIVES: The impact on businesses where employees have access to social networking and social media during work hours

Any employee with access to the internet has access to social media and social networking. Below summarises the main concerns surrounding this and the important questions to be considered.

Undetected skiving has never been easier; social networking and social media puts a plethora of addictive gaming, must-see video clips and gossip at the click of a button and can quickly be minimised when the manager passes (or put in a pocket if using a phone). Should access to the most popular websites be removed from work-stations, or a policy issued to ban all use of social networking and social media, or should it be left up the individual employees to decide what is the right and wrong levels of use?

Either not taking action against procrastination that leads to increased workload for other employees, or overly restricting the use of social media and social networking can cause resentment from employees and lowered morale. What is a reasonable level of use for social media during work time? Should productivity be monitored to ensure work activities are not taking a back seat? When and what is appropriate action against social networking and social media use?

While most employees may be certain how not to act face-to-face or even over the phone to not discriminate or bully, over the internet the line seems to be blurred for some people. Also, it may be important to keep in mind that “an employee may not always be aware they are being bullied. For example, an employee may not see comments posted about them on social networking sites or blogs.” (ACAS). Should your bullying/discrimination policy be extended to include what is unacceptable behaviour on the internet?

Some employees may be setting themselves up for injury by checking into their social network or watching social media for a break from work instead of stepping away from their consoles. Should management proactively encourage breaks away from the computer to ensure regular rests away from consoles?

Some not so scrupulous people use social networking and media to spread their homemade viruses and malware; less tech savvy members of staff could easily infect their worktops and other networked computers with malicious code while browsing. Should employees be provided with basic training on avoiding downloading viruses and malware? What is suitable virus and malware protection and how often does it need updating? How often should regular backups be made of local and system data in case of infection?

POSITIVES: The new opportunities available for all businesses for improved/cheaper communication and marketing strategy

Social networking and social media provide a gateway to a large portion of the public and also provides free communication tools which, if used with care may reduce company costs, improve flexibility and improve productivity. The following paragraphs elaborate on this.

Social networking tools provide free and quick communication avenues for exchanging messages with employees worldwide. Email, tweeting, instant messaging and more are all at the tips of your fingers giving a new level of flexibility as to the how, when and where employees can communicate with each other. Blogging or posting podcasts to keep employees and customers up to date with policy changes, and closely monitoring feedback comments and questions, allows any issues to be dealt with quickly and effectively, aiding the smooth transition of company improvements.

Private networking can be used for internal meetings and conferencing and to centralise information, improving real-time collaboration and flexibility of information access across a company. Similarly social networking can be used to keep up with industry information and conferences, linking with other professionals with similar goals to encourage co-operation and collaboration across companies, helping to share and build on innovations as they appear in your field.

Based on these figures it is not surprising that businesses are increasingly using social media and social networking as their ‘marketing face’, as the gateway to a large portion of the population for recruitment, product advertising and brand marketing strategies. Using social media and social networking for direct communication to potential employees and customers cuts out the middle men (advertising and recruitment agencies) and in turn cuts down the bureaucracy, time and money involved.

It is however, important to remember that there are still many people that are not actively using social media and social networking and so to ensure that recruitment is not discriminatory and that marketing reaches a larger cross section of the population other routes would still need to be considered.

Social media can be used to promote achievements, special offers or services of a company. Hearing about a company from individuals is much stronger than hearing about it from the company itself, especially as an individual can create a connection with other individuals. In the world of social media, it doesn’t take a team of advertising specialists to provide a boost to your company branding, just enthusiastic employees wishing to share their positive experiences of your company with others. Rather than monitoring employees to check they aren’t posting social media that could hurt your company brand, it may be productive to give incentives for positive promotion of your brand and innovative ideas of advertising products and services of your company.

Engaging with and making a connection with potential employees could be the difference between them taking the job or turning it down in preference of another. Proactively connecting with candidates through social networking sites could give you that all important edge for getting the best picks. Encouraging current, potential and soon to be former employees to connect to your company through social networking allows them to stay linked with the individuals within the company encouraging continued brand loyalty. This link can also serve as a communication line to share positive branding messages with the public such as notification of company awards or special recognition received or any other positive messages.

Have your say on what you think social media and social networking means to business… Do you think it is something that really needs protecting against, is it worthwhile to spend time embracing it, or do we need to do a bit of both?

[This information is provided for reference only – no liability accepted. All registered trademarks recognised. E&OE.]

1 thought on “Social Networking and Social Media: What does it mean for business?”

8 ways your Company LOSES MONEY
due to HR Policy:

Get it Now FREE!

The Consultant behind Holges Consulting: